Breach of Contract - Statute of Limitations

If Someone Breaches a Contract With Me, How Long Do I Have to File a Lawsuit Before My Claims are Barred by the Statute of Limitations? 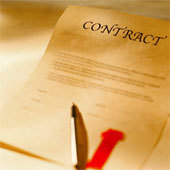