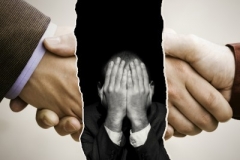 It is important for lawyers and business people to understand the law about material and non-material breaches because, in many contracts (maybe most), the parties will not perform their respective obligations perfectly. Generally speaking, the law does not relieve a party to a contract of its obligation to render its agreed performance under a contract just because the other party has not performed its end of the deal perfectly. In most cases, only when a party has committed a material breach of the contract will the law excuse the non-breaching party from doing what it agreed to do.

What kinds of contract breaches are considered material? What kinds are considered non-material? There are no precise answers to those questions. Whether a breach is material or non-material must be decided on a case-by-case basis. There are several factors a Tennessee court will consider when it determines whether a breach was material or non-material. The most important of those factors (in this author's opinion) are: (1) The degree of the loss of the non-breaching party between what it received and expected to receive; (2) whether the breaching party could have cured its breach had it been given notice of the breach and an opportunity to cure it; and (3) the good faith (or lack thereof) of the breaching party. There is a lot of room for interpretation when the above factors are applied. You could say that, when a court undertakes to determine whether a breach was material or non-material, Tennessee law pretty much results in the court applying a "smell test."

Here is a summary of some Tennessee cases where the courts have made the determination of whether a breach was material, or, on the other hand, non-material.

If you find yourself (or your client) in a contract situation where you want to stop doing what you agreed to do because the other party has breached the contract, there are some steps you should carefully consider taking to ensure that you have protected yourself as much as possible.

Under some circumstances, a court will not require a party to allow the other party a chance to cure its breach. Under what circumstances is a party excused from providing the breaching party with an opportunity to cure the breach? Here are those circumstances:

Before you decide that you aren't required to do what you agreed to do because the other party breached the contract, make sure that you have not waived or modified the contract either expressly, or by your conduct. Depending on the circumstances of your situation, a court could conclude that you waived or modified the contract provision which you allege was materially breached. For example, in one Tennessee case, an owner refused to pay the builder for a condominium because the condo had not been completed by the time agreed to in the party's written contract. The court held against the owner because the owner had knowingly continued to allow the builder to build after the agreed completion date. Therefore, the court found that the owner had waived his right to insist on strict adherence to the contract schedule. [xv]

Document and photograph everything that will support your position that the other party's breach was material.